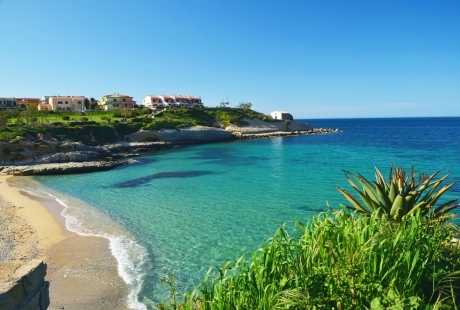 The history of the growth of Porto Torres (21,000 inhabitants) has always been closely connected to one element, the sea. The port of the city still represents, with that of Olbia, the most important maritime port of Northern Sardinia.

During the 1950s, the city became the island's industrial hub; thus, it underwent an unparalleled building surge.

The centre, which is located on the extreme north western most tip of the island, within the Gulf of Asinara, has an ancient history that can be traced back through many archaeological findings.

Although founded in Carthaginian times, it was the Roman Turrys Lybissonis that significantly altered the territory. The vitality of commercial exchanges was remarkable, and it was precisely from Turry's that the sorting and storage of agricultural products took place. Grains, in particular, were of great importance. The products were brought to Ostia, where they were then "absorbed" by the imperial distribution system.

The architectural ruins from the long stay of the Romans, are an essential visit. They are all easy to reach from the town centre, with the furthest examples located just outside the port, such as the Antiquarium Turritanum - an archaeological museum adjacent to the same site, where it is possible to visit the remains of the thermal bath complex dating back to the end of the III century A.D. and the start of the IV century A.D.

Traditionally, the area is also known by the name of Palazzo del re Barbaro (Palace of the Barbarian King) as it was called by the Diocletian emperor responsible for the killing and passion for the proto-martyrs Gavino, Proto, and Gianuario at the beginning of the 5th century.

The famous Basilica around which the population built their second urban centre, in the Middle Ages, is dedicated to Gavino. The ancient Basilica, with its opposing apses, is unique and is undoubtedly one of the most impressive examples of Romanesque architecture in Sardinia. Remodelled in the pre-existing early Christian construction, it was influenced by various craftsmen and alterations (Pisan, Gothic-Catalan). Inside the church, there is a wooden catafalque of Saints Gavino (the town patron), Proto and Gianuario.

The territory, the coast and the sea

The beaches along the eastern coastline all share unique beauty.

Starting from the Cristoforo Colombo waterfront and heading towards Platamona, we reach the beaches of Scoglio Lungo and Balai - a beautiful sandy and rocky bay protected by the small country church of San Gavino.

Just a short distance away, continuing along the picturesque coast, we reach Balai Lontano, where there is another small church. Tradition has it that the two buildings mark the place where the three saints (Gavino, Proto, and Gianuario), were martyred.

Not to be missed on May 3rd is the procession of the simulacra of the saints. The procession proceeds from the Basilica of San Gavino to the small church of Balai Vicino. The images then remain at the little church until Pentecost, when they are taken back to the Basilica.

Accompanying the event is an extensive market that comes alive on the main street "Corso Vittorio Emanuele," which opens up from the port and the dominating XIV century Aragonese Tower, and reaches the heart of the town. This market brings together merchants from all over the province. Here, the tourist searching for a good bargain will easily find all types of items, ranging from local crafts to the tasting of traditional food products.