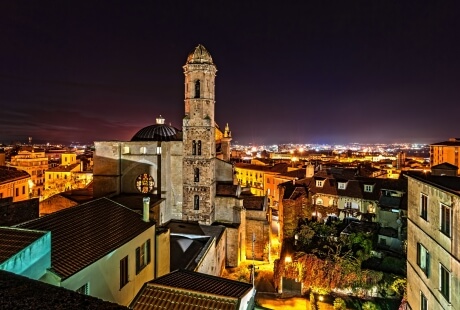 Sassari is the second largest city in Sardinia in terms of the number of inhabitants (129,000). It rises on a vast limestone plateau that slopes gently down towards the Gulf of Asinara.

The city is the capital of the province bearing the same name, as well as its administrative headquarters.  It has been inhabited since Neolithic times and is characterised by many Nuragic complexes dotted around the region.  Mount Accodi, a prehistoric altar built in 2400 B.C. and discovered in 1952, is just one of the significant archaeological findings of the area, and is easily reachable from Sassari, along the SS 131, in the direction of Porto Torres.

In Roman times, Sassari was the immediate inland of the powerful and active Roman colony of Turris Libisonis (Porto Torres).

Despite the many ancient archaeological findings, the first specific reference to the city was discovered in the Condaghi (ancient registers of notarial deeds) of the monastery of San Pietro in Silki. It was first named in an act dated 1131, as Jordi de Sassaro. The city is referenced a second time in 1135 when the church of Sancti Nicolai de Tathari is mentioned.

In the XIII century A.D., the city, guided by the authorities, was first allied with Pisa, and later with Genoa. It was during this time that there was a significant increase in the population and urban development.

During this development, the town was fortified, and even today despite the modern construction over the years, it is still possible to see some parts of the original city walls.

The Aragonese domination led to a period of great social and economic crisis, and Sassari, due to pestilence and disorder, gradually lost its population, only to rise again with the peace of 1420, when it acquired its status as the city of reference for northern Sardinia once more.

Traces of the Spanish occupation can be seen in the Platha de Cothinas (today called Corso Vittorio Emanuele) that runs from one end of the town to the other, or in the city hotel 'L' Albergo Cittadino,' and City Hall.

During the XVI and XVII centuries, Sassari suffered an extreme resistance to the Saracen invasions (an invasion that also afflicted other areas of Sardinia), which hindered the full development of the city. In 1562, the college "Studi di San Giuseppe" was founded by the Jesuits, which then became the University of Sassari in 1617– the first university of Sardinia, and among the oldest in Italy.  Within the university complex, the university library, contains many ancient manuscripts, including the previously mentioned Condaghe di S. Pietro di Silki.

The historic centre and architectural examples

The historic centre of Sassari is amongst the largest in Sardinia. It is possible to cross the ancient Platha (plaza) and head towards the most characteristic heart of the city. The beautiful fountain, Fontana del Rosello, which we pass as we take Viale Umberto adjacent to the Trinità Church (Chiesa della Trinità) is also well worth seeing. Built in 1605, in late renaissance style, the fountain, also known as Garusello, has since become the symbol of Sassari. The presence of the Savoia family marked, from 1718, the start of a new architectural period. Some of the most significant monuments of this period include the Piazza d'Italia with its majestic Palazzo della Provincia and the neo-Gothic Palazzo Giordano. The elegant square which is today still the hub of the centre, a local meeting point, and possesses an evocative portico containing typical bars.

During the second half of the XIX century, the architectural profile of the centre became more animated, thanks to the dynamic influence of eclecticism, which created a new impulse towards the hybrid experimentation of art nouveau.

In the rich and multi-faceted "architectonic landscape" provided by the classic itinerary, on foot from Porta Sant'Antonio (near the station) up to Corso Vittorio, to visit the Civic Theatre (1830) fashioned on the forms of the Carignano Theatre of Turin and the beautiful Cathedral of San Nicola: built in Romanesque style in the 12th century.  It underwent numerous alterations, particularly between 1480 and 1505. The Aragonese chapel through which you can access the Cathedral Treasure Museum is beautiful. Other places that should not be missed include Palazzo Tola which houses a famous library, and the G. Sanna National Archaeological and Ethnographic Museum.

One of the most important events in Sassari is The Festha Manna (the large festival) also known as the Faradda di li Candareri (the descent of the candlesticks) held on the 14th August. This famous religious festival was created to thank the Madonna for her protection during the terrible plagues that invaded the city.  Eight men carry seven candlesticks standing three meters tall. They represent the corporations (gremi). Starting from "Chiesa del Rosario" heading up to the church of Santa Maria di Betlem. The vibrant rhythmic beating of drums accompanies the procession.

The festival also includes samplings of typical products, dances, and fireworks. Another important event takes place on the sixth Sunday after Easter: the "Cavalcata Sarda" (Sardinian Horse riding). It is a traditional celebration of the victory of the Sardinian and Pisan forces against the Saracens or, according to other sources, it is a re-enactment of the equestrian processions that the nobles of the city organised in honour of King Philip V of Bourbon.

Finally, before leaving one must indulge in the delicious gastronomic dish called Fainè a historical dish brought to the island by the Genoese.

The data is processed to allow the creation of the account and take advantage of the services offered. In the case of specific consent, the data is also processed for marketing purposes. Please read the privacy policy before registering

The data is processed to allow the creation of the account and take advantage of the services offered. In the case of specific consent, the data is also processed for marketing purposes. Please read the privacy policy before registering

The data is processed to allow the creation of the account and take advantage of the services offered. In the case of specific consent, the data is also processed for marketing purposes. Please read the privacy policy before submitting your request

The data is processed to allow the creation of the account and take advantage of the services offered. In the case of specific consent, the data is also processed for marketing purposes. Please read the privacy policy before registering.

The data is processed for Personnel Selection purposes and, in the case of consent, for marketing purposes. Please read the Privacy Policy before submitting your application.