The city center and traditions 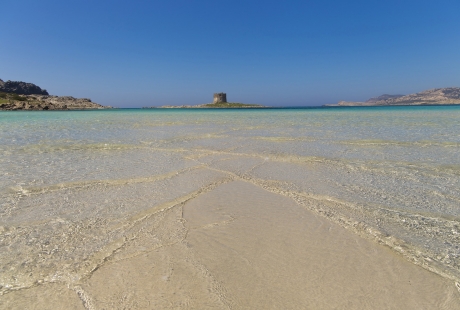 History of the town

Stintino, an autonomous municipality of the province of Sassari (1.127 inhabitants) owes its fame mainly to the beach of Pelosa, one of the most beautiful beaches in Sardinia and a true pearl of the Mediterranean. La Pelosa is a long strip of bright white sand and incredibly clear shallow waters with a range of colours varying from turquoise to deep blue and intense sapphire.

This beautiful tropical beach awakens a sense of adventure in its visitors, just a short swim away, the island facing the beach, is dominated by the Pelosa Guard Tower built by the Spanish in the XVI century.

The centre ‘Isthintinu,’ as it is called by the inhabitants of Sassari, voted it their favorite seaside spot. It was founded in the second half of the XIX century by settlements of fishers from the nearby island of Asinara. The centre has developed around the sea, following the natural coastline.

The original harbour, known as Minori, provides an excellent opportunity to take pleasant walks and browse shops with interesting Sardinian artisanal handicrafts. This harbour has recently been joined by a new, larger harbour – Mannu.

Other beaches complete the picture of an enchanting town that attracts thousands of tourists each year, notably Ezzi Mannu, le Saline, and Pazzona. Casaraccio pond is another example of the natural uniqueness of the area, and is well worth visiting, as here you can often see examples of rare birds, such as the black-winged stilts, the grey heron, and sometimes, elegant pink flamingos.

The coastal road for Capo Falcone, located on the most northwestern tip of the island, is also worth a drive, as it offers an enchanting view over the Gulf of Asinara, accompanied by the intense aromas of the Mediterranean plant life.

Over the years, the local community has fostered an exclusive relationship with the sea, and its most significant initiatives are linked to this very special union: the tuna festival every June takes us back to traditional fishing techniques, which are also illustrated in the museum of Tonnara - another absolute must-see.

Also worth mentioning are the Latin sailing races that bring many sailing enthusiasts to the gulf for the last weekend of August. Other important festivals include the festival of the Beata Vergine della Difesa, in September, and that of San Nicola.

It should also be noted that the area is not only a beautiful paradise but also an extremely popular tourist destination, particularly during the summer months.

Main picture above by Francesca Meloni